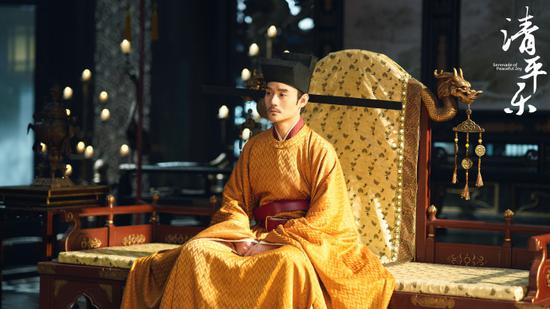 “Serenade of Peaceful Joy,” a Chinese TV drama about Emperor Renzong of Song Dynasty (960-1279), has racked up more than 2.6 billion views online since its April 7 release, data showed.

Starring popular young actor Wang Kai, the show had over 98 million views Monday on Tencent Video, the exclusive platform for the show’s online streaming service, according to Maoyan, an online platform that provides film and TV drama data.

It had topped Maoyan’s daily online video viewing chart for Chinese TV dramas for 18 consecutive days, from April 17 through Monday.

The story follows Emperor Renzong as he struggles between maintaining his ideologies of governing the country and his love for his daughter Princess Huirou.

The four-decade reign of Emperor Renzong, from 1022 to 1063, marked the high point of Song influences and powers. Many of the most well-known literary writers and poets in Chinese history lived or started their literary creations during this period.

Previously promoted with the title “Held in the Lonely Castle,” the TV show is adapted from a popular historical romance novel of the same name by Milan Lady.